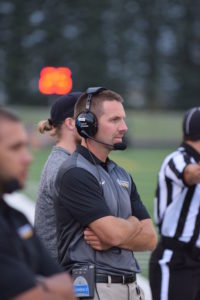 Two games into his first season as head coach at Dordt College Joel Penner has led the program to a spot it has never been. A 27-13 victory over McPherson College of Kansas has the Defenders off to their first 2-0 start since the school started offering varsity football in 2008.

Dordt has never won more than two games in a season and this marks the first time since 2014 the defenders have posted back-to-back wins.

“To be in a spot where they can just taste victory is a really neat thing for them”, said Penner. “They have known defeat here for a long time.”

Dordt’s shotgun/pistol triple option attack is putting up big numbers. The Defenders have piled up 701 yards of rushing in two games and Penner says it is an offense they can win with.

“I have been in the GPAC before and I have played in November so I know what the weather is like up here”, added Penner. “If I am throwing in 40 times a game and that is how I live and die then I just better pray for good weather.”

Things get tougher for the Defenders this week as they open the Great Plains Conference race at home against second ranked Morningside.