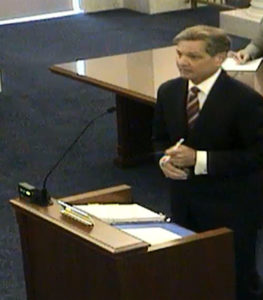 The Iowa Supreme Court heard arguments today on a lawsuit brought by the president of the state’s largest public employees union and multiple Democratic lawmakers against Governor Terry Branstad over the closing of the mental health institutes in Clarinda and Mount Pleasant. Branstad used his line-item veto of the spending plan to keep both places open.

Attorney Mark Hedberg argued against the governor’s action. “We feel that the governor did not exercise his veto appropriately — and even if it was appropriate — it should have no effect in closing down the institutes,” Hedberg says. He says the governor’s veto extended beyond the funding issue and wiped out the law creating the facilities.

“We believe that the statute that created these facilities still exists. And that was a condition on that appropriation,” Hedberg argued. “If they wanted to shut it down, he should have instead of vetoing it, sent it back to modify the statute itself, not simply the appropriation.”

Justice David Wiggins questioned Hedberg’s reading of the law. “Talk about the statutory obligation. What in the statute requires those two locations to remain open,” Wiggins asked. Hedberg responded that the wording of the statute identifies the state hospitals for mental illness, including the two in Clarinda and Mount Pleasant.

Justice Brent Appel also questioned Hedberg on that issue. “You’re going back and saying that the item includes the appropriations measure and pre-existing law. I didn’t find any other authority for that proposition and I think you didn’t either,” Appel says. “I didn’t, but the suggestion is you can’t alter, it’s part of the budgetary part. In this case he has altered the statute — not simply reduced the funding — he has altered the statute by literally taking out two specific institutions we believe by law are required to exist. So therefore he has altered the statute,” Hedberg replied.

The justices asked if the law simply named the facilities and did not require that there be four. “We don’t believe it’s just a naming statute, we believe that it requires these four institutes to service these four regions,” Hedberg says. 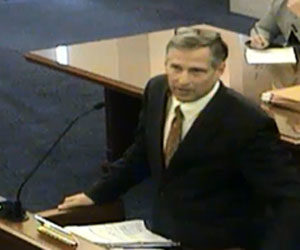 Solicitor General Jeffrey Thompson presented the other side of the case. Justice Wiggins asked Thompson if the governor went beyond his power to veto funding measures.

“No I don’t think so…,” Thompson says. “Why not, he’s closing two institutions that allegedly have some meaning because they are specifically noted in a code chapter,” Wiggins says. Thompson replied,”He also has a duty to faithfully execute his budget responsibilities.” Thompson says the law regarding the mental health institutions does not have any specific requirements for closing them, unlike in some other cases, such as the requirements for the Board of Regents to close the School for the Blind.

Thompson says lawmakers have altered the statute covering the mental health institutes through the years to allow for such things as the superintendent renting out space to nonprofits. “So the idea that this statutory scheme collectively prohibits executive power and budgeting and management is just not true,”Thompson says.

And Thompson says there has been a change in how the service for mental health patients is now delivered away from set facilities to services that are provided in homes and communities. “Because that’s a better way to provide services for mental health,” according to Thompson. Thompson was also asked if the justices should even rule on the issue since the facilities are now closed and no money has been appropriated to reopen them. He says the issue is definitely moot.

“The Legislature doesn’t think it’s that important because they didn’t try to re-up the issue in the most recent legislative session. There was no appropriation, there was no attempt at appropriation. But I also think it doesn’t meet the great public importance exception,” Thompson says.

The facility at Clarinda opened in 1888 while the Mount Pleasant facility opened the year the Civil War broke out, in 1861. They closed last year.