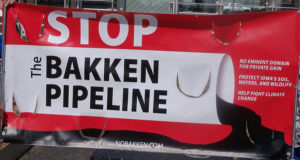 People opposed to the Bakken oil pipeline being built by Dakota Access have turned over more than 33,000 petitions to the U.S. Department of Justice office in Des Moines.

They want the department to review all permits that allow pipeline construction. They also want the Obama Administration to pull all permits and order a full review of the project’s environmental effects. Carolyn Raffensperger heads the group “Science and Environmental Health Network.” She says the permitting process has been unfair to rural Iowans and Native Americans along the pipeline route.

Ross Grooters is a member of the group Iowa Citizens for Community Improvement. “We call upon President Obama to ensure the Army Corps of Engineers rejects the remaining permits in North Dakota and Iowa. Furthermore, the construction should be halted not just the 20 miles either side of Lake Oahe, but along the pipeline’s entire path,” Grooter said.

The petitions say the pipeline has been approved without conducting a rigorous environmental impact statement or consulting with Native Americans who live along the route. Last week, the federal government ordered construction suspended near Lake Oahe, close to the Standing Rock Sioux reservation in North Dakota.

The head of the pipeline’s parent company vowed Tuesday to continue construction, and said that a federal judge had ruled the project complies with federal rules and regulations. The pipeline route crosses 18 Iowa counties and will carry crude oil from North Dakota to Illinois.