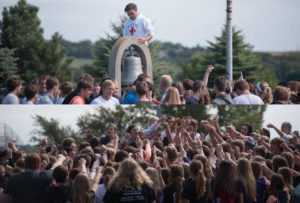 Photo of protest posted on Instagram by Cole Veltri.

High school students in a northwest Iowa school staged a walk-out on Wednesday after the proposed merger of the Battle Creek-Ida Grove and Odebolt-Arthur School Districts failed.

On Tuesday, voters in the Battle Creek-Ida Grove district overwhelmingly voted in favor of the merger, but 57 percent of voters in the Odebolt-Arthur School District voted against it.

Terry Kenealy, the superintendent for both districts, says teachers were going to have some professional development time Wednesday afternoon, so an early dismissal had already been planned for the high school.

“We had become aware that this was going to happen and our principal worked well with the students to try to make sure that it was done in a respectful manner,” Kenealy says. “They walked out to the football field and kind of had a rally and a discussion.”

Students who didn’t want to participate left for home or stayed in the school cafeteria. The majority of students, though, chanted, “Ask the students!” as they left the school.

“My impression since I got here is that students for the most part — we’re not perfect, but for the most part — they get along really very well and they’ve enjoyed this experience as a whole-grade sharing school,” says Kenealy, who’s been superintendent for both districts for two years. “There’s many of them that were upset that the vote failed and they feel that students were not the primary concern that people were focused on when they went to vote…They feel like if they’d focused on the students, it would have passed.”

School boards in both districts will meet next week to discuss what’s next. Kenealy says the Battle Creek-Ida Grove School Board will discuss ending the whole grade sharing agreement with the neighboring district — and that decision must be made by November 1st.

“My point, in my discussion with board members, is students, families and staff members need to know what we’re going to do sooner rather than later because this impacts them more than anybody else,” Kenealy says. “The quicker we can let them know what’s going to happen, the better.”

If the school boards decide to seek a second vote on a merger, that can’t happen for at least six months. Critics in Odebolt-Arthur who voted against the merger this week objected to the make-up of the merged school board. They argued it would give too much control to the Battle Creek-Ida Grove side of the district. About 3900 people live in the Battle Creek-Ida Grove district and about 2000 people live in Odebolt-Arthur’s district. The merged district would have covered 259 square miles and included more than a thousand students.