You are here: Home / Education / NASA division director to talk about space exploration at U-I 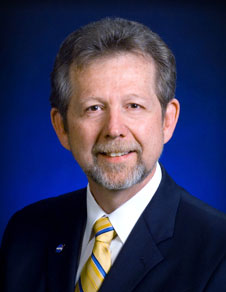 A southeast Iowa native who’s a top NASA official is speaking at his alma mater, the University of Iowa, this afternoon about space exploration.

Jim Green, originally from Burlington, is the director of the planetary science division at NASA headquarters, which leads missions to Mars, Jupiter, Saturn and elsewhere. Green’s lecture today is on the search for life beyond Earth.

“There’s a fundamental question from human beings and that is, ‘Are we alone?’ and we have a wonderful opportunity to answer that question, whether the answer is ‘yes’ or ‘no,’ we don’t quite know yet,” Green says. “We’re really pursuing that and we can answer that, I think, within the solar system.” Water is one of the key building blocks for life as we know it. Green says we’re finding that nearby planets may have — or may have once had — the right conditions necessary to support life, both microbial and potentially more complex.

“Venus, for instance, we now believe had an enormous ocean,” Green says. “It actually would’ve been what we call a ‘habitable environment’ before the Earth, but it’s gone through rapid climate change. It’s something we need to study because it’s something that could happen here on Earth.” Green says our other nearest planetary neighbor, Mars, has an enormous amount of water under its surface and under its polar cap in the northern hemisphere. Green, who served as the NASA consultant on last year’s blockbuster movie, “The Martian,” notes we have a host of rovers and satellites surveying the Red Planet. Jupiter and Saturn are also points of crucial study.

“Further out in the solar system, we’re discovering a variety of moons of these giant planets that are just unbelievably fascinating with huge amounts of water, far more water than the Earth has, actually,” Green says, “and it’s just in a place where life could have started in a completely different way.” Extra-solar planets — those outside our solar system — are being discovered at such a phenomenal rate that it’s leading to a search for a place they’re calling “Earth 2.0.”

Green earned his undergraduate and doctoral degrees in physics at the U-I in the 1970s. His talk, “The Search for Life beyond Earth in Space and Time,” begins at 3:30 P.M. at Van Allen Hall.