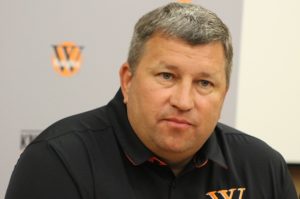 The Wartburg College football team opens the Iowa Conference race at league newcomer Nebraska Wesleyan. The Prairie Wolves open their first season as a member of the conference after competing in the Great Plains Conference.

Wartburg coach Rick Willis who says Nebraska Wesleyan will be a good fit for the conference.

“They play a physical, tough brand of football and I think they will compete very well in our league”, said Willis. “They have a very good athletic department overall and will just make our league stronger and tougher.”

Nebraska Wesleyan coach Brian Keller says his team will find out how it measures up in the new league by hosting a Wartburg team that has won three titles in the past six years.

“Yeah what a coincidence that is who we get first”, said Nebraska Wesleyan coach Brian Keller. “It is really neat to play the team that probably has the most prestige at this point and it is chance to play the best and see where we measure up.”

After losing 31 seniors off last year’s team that finished 9-1 Wartburg is relying on several new faces this season. In his first start, sophomore quarterback Matt Sacia passed for 296 yards in a 29-22 loss at Monmouth of Illinois but the Knights only rushed for 83 yards.

“Us throwing the ball 51 times is not what we are about and part of it was we were not able to run the ball as well we want to run the ball”, added Willis. “That is really a focus for us and something we need to improve on.”

The Prairie Wolves are 1-1after a 17-13 loss to Illinois Wesleyan.