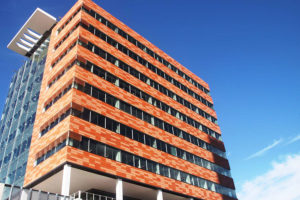 The latest addition to the Cedar Rapids skyline is officially open for business.

The 11-story building in downtown Cedar Rapids, near the Cedar River, is the new corporate headquarters for CRST International, a trucking firm.

Company chairman John Smith says his company could have moved its corporate campus elsewhere, but chose downtown Cedar Rapids for a reason.

“I think that there’s a consensus around the community that we need a vibrant downtown and that this is one way to do it, start investing,” Smith says.

The building cost $37 million and it is called the CRST Center. The trucking company will occupy two floors. Other floors are being rented by Bankers Trust and Holmes Murphy, an insurance company, as well as RSM International, which is an auditing firm.

Smith says when CRST announced plans to move its corporate campus from southwest Cedar Rapids to the city’s downtown, it seemed to spark interest from others.

“I can’t say that it was our announcement, but I do think it helped and I think it made people think differently about the downtown Cedar Rapids,” Smith says.

Smith’s parents founded CRST more than 60 years ago and a converted chicken coop served as the company’s first office. The new CRST Center reaches 180 feet and is among the tallest buildings in Cedar Rapids. The building has three floors of parking for 240 vehicles and eight floors of office space on top of that.