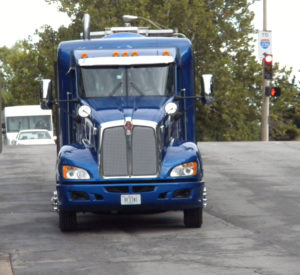 Governor Terry Branstad road around the state capitol in a semi to recognize truckers.

Governor Terry Branstad rode around the block on a street along the state capitol in a semi tractor pulling a tanker today to mark the end of “Trucker Appreciation Week” in Iowa.

The governor says the trucking industry is important to the economy of the state. “Our transportation and distribution supply chains have become safer, more efficient and more competitive. If you want to see evidence of the trucking industry’s impact, you need to look no further than the products in your own kitchen, the supplies in your offices, or the clothes on your back,” according to Branstad.

He says 75 percent of Iowans depend 100 percent on the goods brought to their cities by trucks. “Three-hundred-and-fifty-thousand tons of cargo is moved every day by trucks in the state of Iowa,” Branstad says. 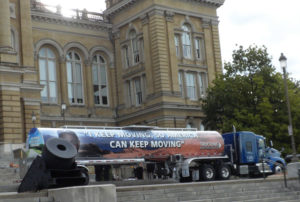 “Safety on the state’s roadways is the heart of everything we do at the Iowa Department of Transportation,” Trombino says. “However, safe roads are not obtained solely form enhanced roadway engineering or increased law enforcement. Increasing the safety on the state’s roads and reaching the goal of zero fatalities takes the commitment of everyone.”

Trombino says trucking companies have put a lot of effort into training drivers and creating programs that ensure the drivers are safe. “Strict policies on speeding, seatbelt use and avoidance of distractions while behind the wheel, not only encourage drivers to follow the law, but also work to keep their trucks from being involved in incidents,” according to Trombino. Trombino says other motorists on the roadways need to adopt the same policies to help keep roadways safe. 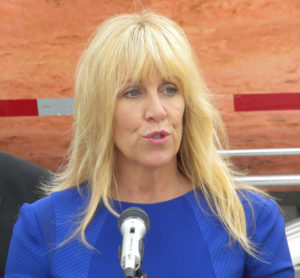