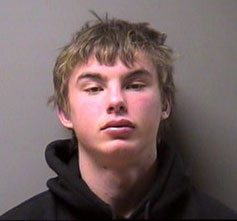 Wapello County Attorney Gary Oldenburger defends the decision for a plea agreement that allows a suspended 10-year prison sentence for a19-year-old Ottumwa man who pleaded guilty to lascivious acts with a child.

Kraigen Grooms was initially charged with second-degree sexual abuse more than two years ago after a video surfaced on-line of him sexually assaulting a toddler.

The case created a lot of discussion online and a petition to remove the judge who issued the sentence. But Oldenburger says the plea deal was due in part to the input of the parents of the child.

“In this situation, the parents of this victim were very insistent that Mr. Grooms not spend time in prison or a lot of time and in jail and were mainly concerned that he get treatment and that he would be on the sex offender registry. So, that was a big factor early on in our decisions about the case,” Oldenburger says. He says they also took into account the time Grooms was in jail while waiting for his case to be heard.

He says Grooms spent 860 days in jail and earned credit for good behavior that takes time off his sentence and would mean he would not have much more time to serve if he was actually sent to prison. Oldenburger says the good behavior in jail and other factors played into the decision.

“He also had some psychological evaluations while he was in jail and was determined not to be a high risk to reoffend,” Oldenburger says. “And of course that was one of our main concerns.” Oldenburger says Grooms was only 16 when he was arrested and that meant they had to look at his potential for turning things around.

“Juveniles do have a very high success rate after receiving treatment. And so that was a pretty important factor as well,” according to Oldenburger. While Grooms won’t go to prison, Oldenburger says he will be closely watched to ensure he complies with the conditions of the plea agreement.

“He’s on special sentences, he’s on parole for the rest of his life, so he will have some sort of supervision for the rest of his life,” Oldenburger explains. “And so during both this five-year period of probation if he fails to comply with those requirements, he could be revoked and sent to prison for the 10 years. But during the remainder of his life if he violates the conditions of that parole, for the first offense he could be sent to prison for two years and subsequent offenses go to prison for five years for each of those violations.”

While many people said on social media they were outraged by the suspended sentence and asked if the legal system had failed, Oldenburger says the system worked. The county attorney says each case has to be examined to determine the best outcome to prevent the person from hurting more victims.

“In this particular case, sending him to treatment and having him closely supervised for next several years — and under whatever supervision is needed the for the rest of his life — is going to be more effective than sending him to prison,” Oldenburger says.

Oldenburger made his comments on KBIZ radio in Ottumwa.