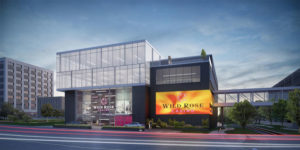 Local developers have teamed up with a company that already owns three casinos in the state to put together another plan to build a casino in Cedar Rapids.

The Iowa Racing and Gaming Commission voted 4-1 against a proposed casino in the eastern Iowa city back in April of 2014. The president Wild Rose Casinos & Resorts, Tom Timmons, says his company is working with local developers Steve Emerson and Hunter Parks on a new option.

“What they want to do is put something downtown. The last plan that was proposed…had a casino on the west side of the river, it was 840 slot machines, 30 tables games, full blown hotel- convention center-eatery,”Timmons says. “What these individuals came up with is maybe having a casino more downtown on the east side of the river.” Timmons says it would be a smaller project.

“We’re calling it kind of a boutique casino if you will. It’ll be maybe two-thirds the size — 600 to 700 slot machines, maybe 15 to 20 table games,” Timmons explains. He says they have commissioned a study on the issue.

“To see what is the right size of a casino — not to maximize revenues — but the right size of a casino not to impact the existing casinos. Which is part of the reason the plan failed last time,” Timmons says. The Racing and Gaming Commission awarded a license for the casino in Greene County that Timmons’s company owns shortly after turning down the Cedar Rapids casino plan. The commission members indicated at the time they would not be interested in adding any more gambling licenses. Timmons believes the new proposal might get them to reconsider Cedar Rapids.

“What they said was they weren’t interested in adding a casino of that size because of the impact on other facilities,” Timmons says, “if you size it right, I’m not sure that they said they wouldn’t do that.” A proposal to create a smoke-free casino was raised for Cedar Rapids, as an alternative to the current casinos, but that never went anywhere. Timmons says the smoking issue isn’t something they are looking at right now.

Timmons says, “That’s so far down the road I don’t know. That would be the only one in Iowa if that was done. We’d certainly put in a nonsmoking room I could tell you that…to go totally smokeless, I wouldn’t say that at this point.” Wild Rose Cedar Rapids estimates the new casino would create 200-225 permanent jobs and inject 6-to-7 million dollars into the economy via employee payroll and benefits alone. Timmons says it will take some time to complete the study and get a proposal ready for the Racing and Gaming Commission. He says it would likely not happen until January.

Wild Rose operates casinos in Emmettsburg and Clinton along with the Greene County casino in Jefferson.