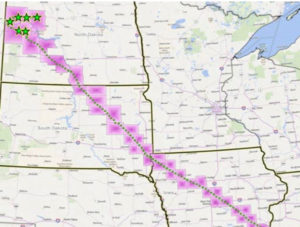 About 250 people demonstrated Saturday at the site where construction crews plan to extend a crude oil pipeline under the Mississippi River.

More than 40 protesters climbed a fence at the site and were arrested for trespassing. Jessica Reznicek helped set up the round-the-clock camp just outside the construction site, which is near Sandusky, Iowa.

“We’ve got roles for everybody and just to take part and support the people who are going away in police cars,” Reznicek says.

Reznicek was among those who were arrested Saturday afternoon. Reznicek says she’s doing it for those who can’t join the protest. “I think about my brother and his two children and he’s got to go to work 12 hour days, seven days a week and I’m doing it for him and those kids,” Reznicek says. Five juveniles and 39 adults were arrested Saturday in what a Lee County deputy sheriff called a “passive” protest.