You are here: Home / Education / More than 7,000 low-income Iowa ninth graders in GEAR UP

The State of Iowa will distribute $11 million in college scholarship money to low income students in a dozen Iowa school districts who’ll graduate from high school in 2020.

It’s part of what’s called “GEAR UP” — a college readiness program financed by the federal government. Karen Misjak of the Iowa College Aid Commission says the state got its first round of GEAR UP funding for students in 2008.

“The students graduated in 2014 and right now they’re juniors in college across the state and then in 2014 we received the second GEAR UP grants,” Misjak says. “We started working with the students in seventh grade…They’re in ninth grade this year.”

Misjak says creating a “college-going culture” among the students is key.

“The students might be the first generation college students in their family and so there are a lot of barriers we have to overcome and a lot of information that we need to provide,” she says.

About half of the Iowa students involved in the GEAR UP program in 2008 wound up going to college in 2014. Misjack says 70 percent of them are still enrolled in college. 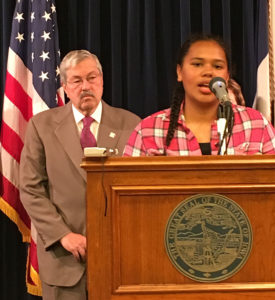 Jaqueline Guardado is a ninth grader at Perry High School who’s part of the new GEAR UP class. Neither of her parents went to college.

“I’m glad to have this opportunity and it’s been really fun to get to know people and have mentors,” she says. “…I hope one day that I’ll get to have a job that I love and something worthwhile that I’ll get up and be: ‘Yea! I’m going to work.'”

Guardado and every high school freshmen in Perry and 11 other school districts are part of the GEAR UP program. It’s a total of more than 7000 Iowa students. The other districts involved are Cedar Rapids, Clinton, Columbus Junction, Davenport, Denison, Des Moines, Fort Dodge, Marshalltown, Ottumwa, Perry, Sioux City and Storm Lake.

This is national GEAR UP week and Iowa’s governor is encouraging businesses and mentors to become part of the program.