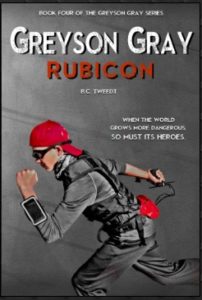 B.C. Tweedt, who lives in North Liberty, says he’s finding a nationwide audience for his stories which follow the fictional 12-year-old Grayson Gray, an Iowa boy who encounters unexpected adventures when he heads off to summer camp in Dubuque.

“He is there trying to get over the fact his father is missing and he meets these friends who are just hillarious and loyal,” Tweedt says. “They discover a terrorist plot going on in the camp and they need to use all the skills they’ve acquired at the sports camp to overcome the terrorists.”

Iowa readers will spot plenty of familiar landmarks in the tales, including a trip to the Iowa State Fair as the boys try to prevent a terrorist attack.

The 31-year-old Tweedt got his inspiration for the stories after working for several years as a summer camp counselor in northeast Iowa.

“I get to have a new group of kids, about 12 boys each week for four straight weeks,” Tweedt says. “I got to see so many different personalities, their hillarity just drove me to write down what they were saying and doing. Eventually, those ideas coalesced into a plot.”

Tweedt has a passion for storytelling as both of his parents are published children’s book authors. He says too many of today’s books for the young adult reader focus on “dystopia” and trying to save a world that’s already been destroyed. Tweedt says his books go a different direction.

“It’s America today so there’s a lot of light-hearted and fun stuff going on that today’s middle schoolers, 12- and 13-year-olds around Greyson’s age, would really love,” Tweedt says. “But then there’s the spark that spurs these kids on. They have to have one foot in the real world and America and another foot in the action and the grittiness, in the exciting adventure part of it as well.”

There’s a misconception, he says, that girls enjoy reading and are more proficient at it than boys. Tweedt says the goal of his books is to help close that perceived literacy gap.