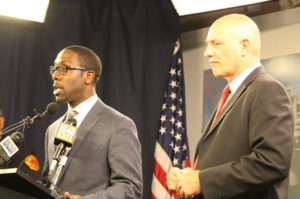 Just days after the police chief in Waterloo reportedly told his officers he was asked to resign, the city’s mayor has announced Dan Trelka is staying put.

Waterloo Mayor Quentin Hart, at a news conference Monday, said he was elected to “make tough decisions” and “move the city forward.”

The City of Waterloo is facing lawsuits for alleged use of excessive force by police officers. “I’m telling you, first and foremost, that I believe that Dan Trelka is the one (who) can help us to address the myriad of challenges internally and externally that we face,” Hart said. Trelka, however, will no longer serve as supervisor of the Waterloo Fire Department.

Hart told reporters he wants Trelka to focus on a policing plan that will build public trust. 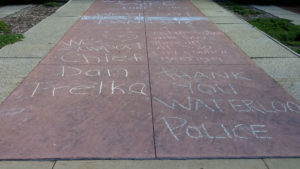 Messages of support for Police Chief Trelka written in chalk on the sidewalk outside Waterloo City Hall.

“I have directed Chief Trelka, for the next year, to only focus on that plan for change for the future,” Hart said. Trelka, who’s been Waterloo’s Police Chief since 2010, said he’s ready to make adjustments.

“We’ve got some challenges to face and some adjustments to make, but we’re having great conversations and all of this is for the betterment of Waterloo. I’m optimistic of the future for all of us,” Trelka said. Two Waterloo Police officers told KCRG-TV last Friday that Trelka said he had been asked to step down. Hart and Trelka, in their statements, did not address reports that Trelka had been asked to resign. 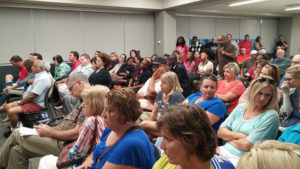 night. The majority of the several dozen people who filled the council chamber and an adjoining hallway come to show their support for the chief, although a few criticized his job performance during the public comments portion of the meeting.

In all, 26 people took about 90 minutes to voice their opinions to Mayor Quenton Hart and the city council. At the start of the meeting, the capacity crowd applaud, cheered and gave Trelka a standing ovation when he entered the room.