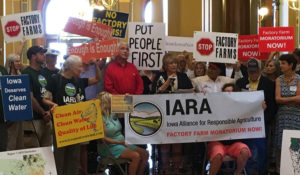 Joyce Otto speaks a the rally.

The recently-formed “Iowa Alliance for Responsible Agriculture” is calling on state officials to issue a moratorium that forbids new construction or expansion of livestock confinements. The group says Iowa water quality has sunk so low, it’s time for action.

“We all should be tired of our state being sacrificed for industrial ag, one neighborhood at a time,” Chris Peterson, a past president of the Iowa Farmers Union who farms near Clear Lake, said during a statehouse news conference.

Joyce Otto lives near Grinnell and a new Prestage Farms facility with 5000 hogs is about half a mile from her home.

“My ability to live freely and healthy on my own property has been stolen from me,” she said. “…Prestage and all the other corporations exploit Iowa’s resources. They pollute our water and our air and then they haul their profits out of state. A moratorium is the only answer for this and we need it right now.”

Bill Stowe, the CEO of Des Moines Water Works, said the impact of animal feeding operations is significant for all Iowans.

“We know, as you know, that 21 million hogs are crowding out three million Iowans,” Stowe said, as the crowd cheered. “It’s time for us to take our state back.”

The Des Moines Water Works has sued over high nitrate levels in the Des Moines and Raccoon Rivers. During today’s news conference, Stowe said it’s time to balance “reasonable agricultural needs…and the protection of our state from industrial agriculture.”

“We won’t be divided. We won’t be told that we are people who are engaging in war with rural Iowa,” Stowe said. “We’re all Iowans. We all need water and we all need safe, affordable drinking water.”

Francis Thicke, an organic farmer from Fairfield, said in the past four years there’s been a 15 percent increase in the number of Iowa waterways declared “impaired” due to pollution.

“If we had, for example, a mandatory program requiring every farm in Iowa to have a water quality plan that addressed the nutrient problems on their farm, we could fix it very quickly,” Thicke said.

Deborah Bunka of Ames, a member of the Farmers Union and Iowa Citizens for Community Improvement, said there’s been an “explosion” of industrial livestock operations.

“The time is now to demand a change in policy in order to stop the destruction of our soil, water, health and quality of life in Iowa,” Bunka said.

Bunka suggested a moratorium on livestock confinements should be in place until the number of “impaired” waterways in Iowa drops below 100. The group delivered petitions to the governor’s office late this morning. A spokesman for Governor Terry Branstad said the governor supports “reasonable regulations” the protect the environment.

“Governor Branstad is not interested in extreme proposals that would harm agriculture and our economy in Iowa, which is exactly what a moratorium would do,” Branstad communications director Ben Hammes said.

Ron Birkenholz, a spokesman for the Iowa Pork Producers Association, said a moratorium would “take away the right of people to make a living.”

“Pig farmers are committed to protecting the environment,” he said. “The industry has shown continuous improvement for decades and the Iowa Producers Association is continually encouraging its members to always be looking at new technology to do things better than they have.”

Birkenholz said in a normal year, the pork industry expands between one and two percent in Iowa.