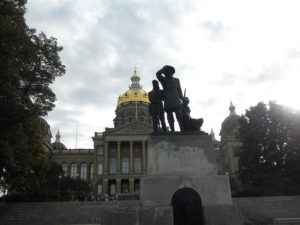 The governor has set Tuesday, December 27 as the date for a special election to fill a vacant state senate seat.

State Senator Joe Seng of Davenport died last week after a two-year battle with brain cancer. By law, Iowa’s governor sets the date for special elections to fill vacancies in the Iowa legislature.

Branstad said this afternoon in a statement that November 8 would have been the “best date for the special election” — since voters will be going to the polls for the General Election anyway — but Scott County’s auditor objected. She said it would be difficult to hold both elections on the same day.

By law, Tuesday, December 13 was the earliest date Branstad could have chosen for the special election in Davenport. Branstad chose the Tuesday between Christmas and New Year’s. It’s a couple of weeks before the 2017 Iowa legislature begins.

Senator Seng was a Democrat. He was reelected in 2014 after defeating a Democratic opponent in a primary, but he had no Republican opponent in the district in the General Election that year.

Democrats hold a sizable voter registration advantage in the district. The two Democrats who represent the same area in the Iowa House plan to compete for the senate seat. Jim Lykam and Cindy Winckler are both on the November 8 ballot, running unopposed for reelection to the Iowa House. 2012 was the last time either of them had a Republican opponent.

Lykam has been a state representative for nearly 14 years. Winckler was first elected to the House 16 years ago.