You are here: Home / Sports / Iowa-Rutgers a reunion for Niemann family 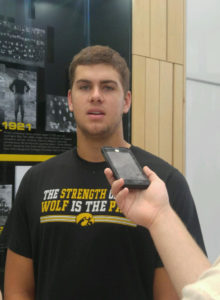 When the Iowa Hawkeyes open the Big Ten race at Rutgers it will include an unusual family reunion. Jay Niemann is in his first season as Rutgers’ defensive coordinator while his two sons are on the Iowa roster. Ben Niemann is a junior starting linebacker for the Hawkeyes while younger brother, Nick is redshirting this season as a freshman linebacker.

“There is nothing I can do from a family perspective about this one way or the other”, said Jay Niemann. “We have known for a long time that this week and this game was coming. The boys have to prepare like they have to and I have to do it like I have to and my wife (Lou Ann) is caught in the middle.”

Ben says like his father, he is just trying to focus on the game and he won’t seek him out during pregame warmup.

“I am just going to try and keep it business like just how I have every other game”, said Ben Niemann. “I probably won’t talk to him until after the game just because we are both doing are own thing in warmups. He has got to coach his guys and I have got to get ready to play.”

Jay says he talks to his boys every week but there will be no discussion about the game this week.

“Once we get through the game hopefully there will be a chance to group up out in the parking lot before they pull off for the airport and get a chance to visit a little bit.”

Jay Niemann spent time as an assistant coach at Drake and Northern Iowa. He also had a stint as the head coach at Simpson College.