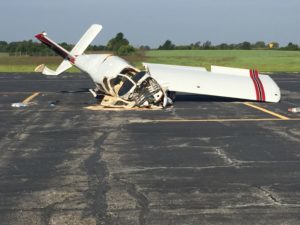 A father and daughter from Des Moines died Tuesday in a single engine plane crash in Lee’s Summit in western Missouri.

Federal authorities are trying to determine what led to the crash that killed 53-year-old Vincent Basile and 24-year-old Kelli Basile.

“People on the scene attempted to give aid to those folks. They pulled them from the wreckage of the aircraft and attempted to render aid. Unfortunately, both persons on board the aircraft were killed,” says Depue.

Thanks to Alisa Nelson of the Missourinet/Photo courtesy of Lee’s Summit police.