You are here: Home / News / Fiddling sisters from Texas make appearances in Iowa 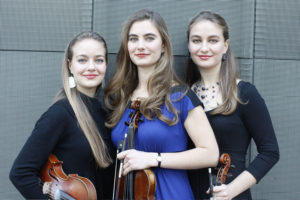 Three Texas sisters, all of whom sing and play fiddles, are making two stops in Iowa tonight and tomorrow.

The Quebe Sisters appear to be young, but they have a wealth of on-stage experience, as they’ve been performing together almost 20 years. The youngest of the sisters, 26-year-old Hulda, says they play a wide range of music, centered on Americana.

“We play a blend of country, swing, a little jazz, western swing, Texas-style fiddling, a lot of acoustic music,” Quebe says. “We’re starting to write some originals, too.” She says Texas-style fiddling is a “close cousin” to what Iowans call bluegrass. Growing up in a suburb of Fort Worth, the girls attended their first local fiddle competition in 1998 and decided fiddling was what they wanted to do. They’ve been touring professionally since 2002.

“It honestly wasn’t something that we had planned on doing when we started out playing,” Quebe says. “We enjoyed playing, fiddling. All three of us started at the same time. We basically started on the same day. I was 7, Sophia was 10 and Grace was 12.” The three sisters are backed by a standup bass and a guitarist. Hulda is married to the brother of the guitarist and he’s married to the eldest sister. With that many family members in close proximity, is there ever friction?

“Being in a band has really forced us to learn how to work together and be really efficient and not get on each other’s nerves and learn how to be respectful of each other’s space,” Quebe says, laughing. “The three of us have always had a vision of how to run our business and the type of music we’ve always agreed that we wanted to play.”

The Quebe Sisters will play at the Temple Theater in Des Moines tonight and at the Redstone Room in Davenport on Friday night.