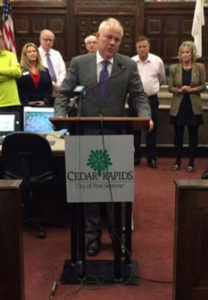 Officials in Cedar Rapids held a news conference this afternoon to warn of potential flooding and try to ease concerns among residents who lived through the city’s record flooding in 2008.

Cedar Rapids Mayor Ron Corbett said it appears likely there will be flooding in low-lying neighborhoods.

“But we have four days to get ready,” Corbett said, “and now is the time to start.”

Cedar Rapids city manager Jeff Pomeranz said forecasts can change, but it is “absolutely critical” for residents to take precautions.

“The city has, with our partners, learned a tremendous amount since 2008,” Pomeranz said. “We have new equipment, resources that we didn’t have before and, most importantly, we have new training and better capability than we had in the past.”

The forecast is for the Cedar River to crest in downtown Cedar Rapids on Monday at just over 24 feet. Cedar Rapids public works director Jen Winner plans to set up two areas tomorrow for volunteers to help with sand-bagging efforts.

“If the predictions…hold true, it’s anticipated we will have flooding occursin the areas of Time Czech, the downtown core, the NewBo District and Czech Village,” she said.

Street closures will begin Saturday in low-lying areas of the city.

“We want to close them before the water hits the road for the safety of the general public,” Winter said.

Mark English, the fire chief for Cedar Rapids, said officials will review the latest flood predictions on Sunday morning and evacuations may be ordered.

“Remember: if we do get to 24 feet, homes and business will be impacted,” English said.

Current forecasts indicate the river will begin to rise quickly in Cedar Rapids on Sunday. Mayor Corbett said “every precaution available” will be deployed by city officials. He’s urged private property owners to check forecasts and make preparations if their property is in the predicted flood zone.

“We’ve been here before, unfortunately,” Corbett said. “But if you believe in ‘experience is the best teacher,’ we’ve had a chance to learn a lot since that 2008 event.”

The Cedar River in Cedar Rapids crested at just over 31 feet in June of 2008. This year’s predicted crest in Cedar Rapids would be seven feet lower, but it would still be the second-highest river crest in recorded history.