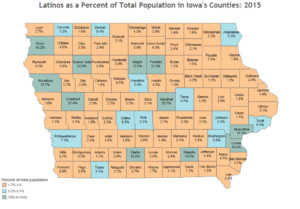 New census data released by the Iowa Data Center  shows the Latino population in Iowa increased by 116 percent from 2000 to 2015 which is 96,147 people.

Latinos make up 5.7 percent of Iowa’s population, making them the largest minority group in the state. Thirty-two percent of the Latinos in Iowa were not born in this county. Seventy-eight percent of them came to Iowa from Mexico.

Over half of the growth in Iowa’s Latino population from 2000-2015 occurred in seven counties: Polk, Woodbury, Johnson, Marshall, Scott, Pottawattamie, and Linn. Polk County had the largest overall population of Latinios at 21.4 percent.

You can find out more at the Iowa Date Center’s website.