You are here: Home / News / Governor deploys Guard for ‘disaster emergency’ of flooding

Governor Terry Branstad is deploying the National Guard to respond to flooding in 13 Iowa counties and prepare for future flooding downriver.

“We just have to deal with whatever situation comes our way,” Branstad told reporters this afternoon during a news conference at Iowa National Guard headquarters in Johnston. “We need to be as well-prepared and in a situation like this in major cities like Waterloo and Cedar Rapids, obviously,we have a little time to prepare and we want to do everything we can for the state to assist the communities and doing the best job we can to avoid and mitigate damage.”

“I think it starts with the community preparedness,” Orr said. “We’re seeing that all up and down our rivers, the pro-active approach of our communities.”

Orr has deployed teams of soldiers to emergency management offices in 11 counties. Three more teams will be deployed tomorrow, focusing on areas south of Iowa City.

“We’ve learned that by working from the Mississippi River north, we can get after some of those big issues early on and identify potential issues that will give us time and an ability to bring resources,” Orr told reporters.

Flooding is not expected in Iowa City, but Orr said communities like Columbus Junction and Oakville may need to brace for flooding. 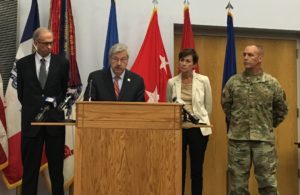