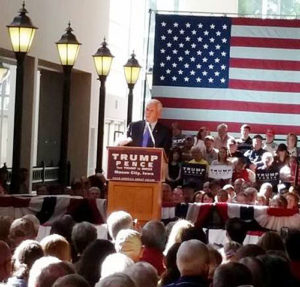 Concerns over the future of the United States Supreme Court drew a crowd of more than 600 Iowa evangelical Christians to its feet this weekend.

“Donald Trump is committed to appointing justices to the supreme court and to all of our federal judiciary who will interpret the law, not rewrite it,” he said.

Pence touted the list of potential candidates for the court that the Trump campaign has just released. And Pence drew an extended standing ovation with this declaration:  “I’m pro-life. I don’t apologize for it. I long to see the day that we send Roe v Wade to the ash heap of history where it belongs.”

Pence did not mention the controversial 2015 U.S. Supreme Court opinion that legalized same-sex marriage in all 50 states. Six years ago, however, Pence spoke to the same Iowa group and made defense of traditional marriage part of his speech.

“To those who say that traditional marriage is not relevant to our budget crisis I say this: you would not be able to print enough money in a thousand years to pay for the government you would need if the traditional family continues to collapse,” Pence said in 2010.

Pence told the Iowa Faith and Freedom Coalition six years ago that Republicans must demand that the party’s leaders defend traditional marriage ‘without apology.”

“We must not remain silent when great moral battles are being waged,” Pence said.

That was October of 2010. A month later, three Iowa Supreme Court justices were voted off the bench by Iowa voters. This year’s judicial retention election was not a focus of this fall’s Iowa Faith and Freedom Coalition event. Electing Donald Trump was. During remarks to the crowd, Iowa Faith and Freedom Coalition president Steve Scheffler briefly listed the last names of the three justices who are on the Iowa ballot this year.

“Of course these are three people that ruled wrong on the marriage ruling, on webcam abortions,” said Scheffler, who is also the Republican National Committeeman from Iowa. “And I guess I would encourage you to do everything in your power…and try to vote against the retention of the court this fall.”

There were “Vote No” yard signs at Saturday night’s Iowa Faith and Freedom Coalition dinner for opponents of the three Iowa Supreme Court justices whose 2009 ruling legalized same-sex marriage here. A rainstorm passed over the banquet hall as the event concluded, however, and most in the crowd kept their hands clear as they dashed to their cars.

“Do you believe in LGBT equality or not? OK? Now, Hillary Clinton and I do,” Kaine said, as the crowd cheered. “Donald Trump and Mike Pence don’t and they want to put people on the Supreme Court to roll back the equality that we’ve gained.”

A Pew Research Center poll conducted this summer found 55 percent of Americans support same-sex marriage, while 37 percent are opposed to it.

A Quinnipiac University Poll conducted in mid-2013 found 61 percent of evangelical Christians in Iowa favored a constitutional ban on same-sex marriage and 58 percent of Iowa Republicans support the ban as well. Overall, 55 percent of all the Iowans surveyed three years ago were opposed to a ban on ban same-sex marriage.