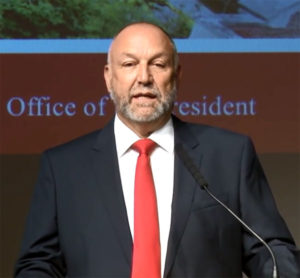 Leath issued a statement today after questions were raised following an incident in November of last year where a university plane he was flying suffered $12,000 in damages during a landing for refueling in Illinois. The damage was covered by insurance, but ISU chose to pay for the damages for what Leath says were business reasons.

Leath’s statement says he checked with the school’s legal offices and determined if was proper for him to fly the Cirrus SR22 plane. He says with his busy schedule and the need to travel he felt he could save the university money by flying himself.

Leath says he reimbursed the school for portions of any trips that were not related to ISU business, an in four cases paid the full cost of the trips. Leath says to move the issue forward he and his wife are making a donation for the cost of the November accident to the ISU Foundation. And he says he will not long fly state-owned planes.
Here’s Leath’s full statement:

In response to continuing questions about my use of Iowa State University owned aircraft, I wanted to provide additional information and respond to inaccurate allegations that suggest I may have violated university policy and/or state law.

I worked with Iowa State University Flight Service and the Offices of University Counsel and University Risk Management in October 2014 to explore my use of the university’s Cirrus SR22 aircraft. I maintain an extremely busy, complex schedule that often requires travel across the state and country. Given the challenges and expense of commercial air travel, I believed my ability to fly this plane as an FAA certified pilot would allow for more efficiency and flexibility as well as a more cost-effective travel option.

The Offices of University Risk Management and University Counsel determined that my piloting of the Cirrus was allowed under Iowa State’s applicable insurance policies. The Office of University Counsel also looked at issues pertaining to me reimbursing the university for portions of my travel in this aircraft. To suggest that my piloting and use of the Cirrus SR22 aircraft was not known by Board of Regents leadership and university senior business administration is inaccurate.

Iowa State’s travel policy contemplates situations where travel on university business is combined with personal travel. In those instances, according to university policy, expenses related to the business portion of the travel are paid for by Iowa State and expenses related to the personal portion are paid for by the employee. The four trips where I reimbursed Iowa State for personal use of the Cirrus aircraft each had a business component to them. Rather than try to allocate the flight expenses between the personal and business travel, I simply reimbursed the university for the full amount. This practice was above and beyond what is required by Iowa State policy.

I believe that an important part of my job is to be a champion for Iowa State University and to create, foster, and enhance relationships between the university and its alumni, partners, friends, and benefactors. My work in partnership with the Iowa State University Foundation to generate additional resources for scholarships, faculty positions, capital improvements, etc. is vital to our university’s continued growth and success. This requires frequent travel on behalf of Iowa State across Iowa, the country, and even at times, the world. Janet and I also maintain a cabin in the North Carolina mountains, which we have opened up to host existing donors and to foster new relationships with prospective supporters to the benefit of Iowa State.

With respect to the hard landing incident, there was no attempt to hide this event from anyone. When it happened, I immediately notified the airport tower and ISU Flight Service and subsequently the FAA. I later notified Board of Regents President Bruce Rastetter. I believe this incident would have been covered by university insurance; however, for business reasons, the claim was not submitted and the cost of the repairs was covered by non-general use funds.

In an effort to move forward in a positive way, Janet and I have decided to make a donation to the ISU Foundation in an amount equal to all of the cost associated with this incident, including the repair and storage costs of the Cirrus. This will be put toward the university’s scholarship fund. Additionally, to allay any future concerns, I will no longer fly any state-owned aircraft.”