You are here: Home / News / Secretary of State videos focus on helping people with disabilities vote 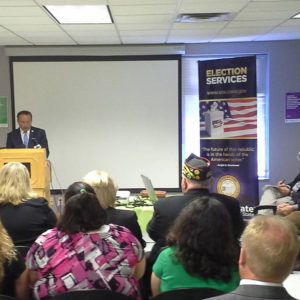 Iowa’s commissioner of elections is touting efforts to help those with disabilities vote.

Iowa Secretary of State Paul Pate spoke at a news conference today in Des Moines. “The thing we hear the most is people with disabilities don’t feel like their voice is being heard. One of the easiest ways to make that voice heard is by voting,” Pate said. It’s estimated between 6 and 10 percent of the 300,000 Iowans with disabilities vote.

Pate’s office has produced several short videos aimed at Iowans with disabilities. “They include instructions on how to use voter assistance terminals at their polling place,” Pate said. “Additionally, we produced videos to share with county auditors and poll workers on how to set up these voting machines and ensure their polling sites are accessible for everyone.”

Steve Crew, chair of the Iowa Developmental Disabilities Council, says his agency has worked closely with the Secretary of State’s office on the initiative.

“In preparation for the election in November, the council has conducted approximately 40 voter trainings around the state,” Crew said. “The trainings include opportunities for participants to become familiar with accessible voting machines.” Iowans with disabilities who are unable to enter their polling place can vote “curbside.”

Two precinct election officials, one from each party, take a ballot and election supplies outside to the voter, who may then mark the ballot in their vehicle.