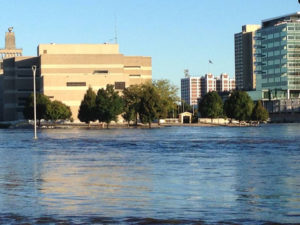 Thousands of hours of effort to fill sandbags and temporary barriers to shore up the flood levee in Cedar Rapids appeared to have resulted in a good outcome for the state’s second largest city.

“The river has reached crest and remained up. It will be at least two days until we feel more comfortable as a city,” Pomeranz says. Pomeranz gave an update in a news conference this morning, where he asked residents to remain patient.

“We’re asking everyone to continue to work with us — and it is not time yet to go back to life as usual — but we are getting close,” he says. Pomeranz says the issue right now is what is happening below ground.

“There’s tremendous pressure by this water underground — so that’s what we don’t see. The enemy now is what we don’t see,” Pomeranz explains. “And we’re going to see in the coming hours and the coming days more water in the streets coming from the sewer system. And that can be just as dangerous as that pressure continues to build, until the level starts to decrease.”

Pomeranz thanks all the city workers, resident and volunteers who came together in the last several days to prepare for the flooding. He again asked for continued patience from the people in the evacuation area until the water level recedes.

“One thing that is extremely important is for individuals to stay clear of the evacuation area to allow workers to do the hard work that they are responsible to do,” Pomeranz. People in some 5,000 homes were asked to evacuate as the floodwaters rose. Pomeranz says the first big concern has passed and now they must continue to wait.