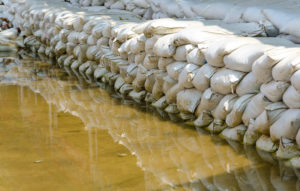 Clean-up is underway in some of the Iowa communities where floodwaters have begun to recede. Black Hawk County Emergency Management Coordinator Lorie Glover says many businesses and residents in her county learned valuable lessons during 2008 flood.

“You know when you have river flooding like we had from either the Cedar or the Shell Rock, when it starts that far north, we do have the opportunity to do flood preparedness well in advance,” Glover says. “And I think that’s one of the main things that people paid attention to this time.”

“People have worked so hard. They have done so much to try to take the lessons that we had from 2008 and try to apply those to this situation,” Hart says.

Hart is praising the staff who work for the City of Waterloo for their efforts.

“People working long shifts, long hours, going above and beyond the call of duty to make sure that this city’s safe,” Hart said.

Parts of Black Hawk County are still not accessible because of flooding, but sunshine and the wind are helping dry things out. Downtown Cedar Falls is open again to vehicle traffic, but in downtown Waterloo, two bridges remain closed. One lane of westbound Iowa Highway 57 heading into Waterloo has reopened. Officials are assessing possible damage before reopening the second lane.