You are here: Home / Agriculture / Soggy fields make it tough on farmers to know what to expect 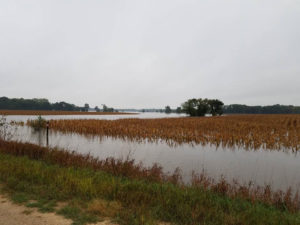 The new U.S.D.A crop report says heavy rains and flooding made it hard for farmers to get into fields to start the harvest.

And it could be weeks before we know all the damage to crops involved in the latest round of flooding.

Brad Ruth farms near Janesville in Bremer County along the Shell Rock River and says the water is going down, but it’s too early to get a good assessment of the damage.

“There’s still water running through, so it’s going to be a week or two before we can get out and look at anything,” Ruth says. He has 150 acres of corn, and thinks part of it could be salvaged.

“There’ll be some of that we’ll be able to harvest. Probably out of that 150, we’ll probably lose maybe 50 of it,” Ruth says “Once the corn gets wet like this, it’s going to take forever for the ground to dry out so we can combine it. It might mold, it might start sprouting, I don’t know.” Even without more rains, the wait could last until we get colder weather. 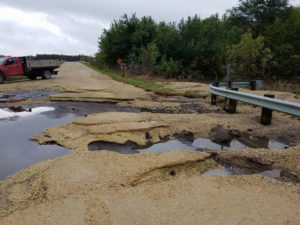 Flood damage to the roadway near the Ruth farm in Bremer County near Janesville.

He says some of the ground might have to freeze before they are able to get a combine in. The rains for Ruth were a blessing that turned into a curse when it comes to yields.

“We’ve got some fairly light sandy, gravely round and when Mother Nature gives you rain every week that ground can produce very well,” according to Ruth. “So, we were looking at some bumper crop on our sandy gravely ground.”

Ruth’s situation this year is classic example of the gamble farmers sometimes take. After years of dealing with flooding issues, he was planning on this being the last year to farm the ground and was hoping to get a good final crop before putting it into the Conservation Reserve Program.