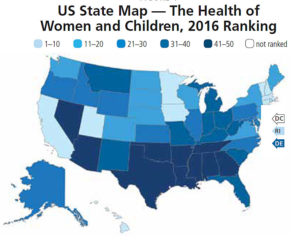 Health rankings released by the United Health Foundation give Iowa an overall rank of 8th when it comes to the health care provided to women, infants and children.

The lowest individual ranking put Iowa at 22nd in the country for infant health.

Information from the foundation says a facility is considered baby friendly if it institutes a ten-step program to successfully teach breastfeeding and passes an evaluation. Only around eight percent of the facilities nationwide are designated baby friendly under that definition according to he foundation.

Iowa’s health care for women ranked 7th, and one of the negatives cited is a high prevalence of excessive drinking in women, especially women who are pregnant. Doctor Fuentevilla says it’s an issue the state should focus on.”While women’s health overall is ranking very good at number7, there’s still opportunity to improve that further by addressing the high prevalence of excessive drinking in women in Iowa.”
She says Iowa has a lot of positives, including a low number of unintended pregnancies (#4 in the nation), low neonatal mortality rates (#2 in the nation), and a high rate of high school graduation (#1 in the nation). Fuentevilla says Iowa mirrors other states which show some variation in the three categories.

She says having women’s health ranked seventh is great, but says the infant health at 22 is not good, while the children’s health ranking is also high at number five.”So the state overall could focus on what things can we do to improve the overall health of our infants.” Massachusetts was at the top of the overall rankings, while Mississippi ranked at the bottom.