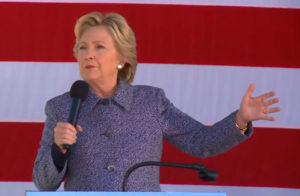 “The election will be close, but we can win Iowa and we’re going to win on November 8th,” Clinton said, to cheers.

Iowans have started voting in person at their county election offices today. A 103-year-old woman from Pleasant Hill in the crowd was recognized by Clinton.

“It’s a great honor to have Ruline supporting me. I am so pleased and she’s going to go vote early today, to make sure her vote counts,” Clinton said, to cheers.

The Clinton campaign had volunteers with campaign signs positioned at the rally’s exit, to lead a pack of people down the street to cast their votes.

“When you finish here you can go vote,” Clinton said, “and we can be on the path to victory here in Iowa.”

Janelle Turner, a breat cancer patient from Windsor Heights who first met Clinton nearly a year ago, was among them. She introduced Clinton at the rally.

“Let’s be on the right side of history, Iowa,” Turner said. “Let’s work together to election someone who really cares about other people and our children.”

Clinton spoke for more than half an hour at the rally, which was staged outdoors, touching on a wide-range of issues, including what she called “family economics.”

“Let’s tackle the costs of child care. Between 2000 and 2012, child care costs went up 25 percent. Incomes barely budged, right?” Clinton asked, and some in the crowd affirmed her comment. “We’re going to increase federal investment and provide more tax relief to working families, so no parent has to pay more than 10 percent of their income for quality child care.”

This isn’t the first time Clinton has proposed this, but it comes just after rival Donald Trump said in Monday night’s debate that the two mostly agree on addressing rising child care costs. In mid-September, Trump called for providing tax credits for child care costs.

Clinton cited some of the flash points during Monday’s debate and the crowd booed her mention of Trump’s comment that it’s smart to pay as little in federal taxes as possible.

“I have no idea what he’s going to say the next time, but you know, I will spend some time preparing for it,” Clinton said, to cheers.

“I did get to say a few things about the positive agenda that we want to have for our country, because I want this election to be about something, not just against somebody,” Clinton said, to cheers. “…I am going to close this campaign like I started my career decades ago, fighting for kids and families.”

Clinton repeated her call for an increase in the minimum wage and Clinton cited Bernie Sanders as she talked about easing the financial burden of a college education.

A spokeswoman for the Republican National Committee issued a statement just before Clinton took the state today, saying Clinton’s campaign “is in trouble” because Clinton has “failed to inspire enthusiasm among Iowans” and early voting among Democrats is “lagging” behind previous years.

(This post was updated at 3:16 p.m. with additional information.)