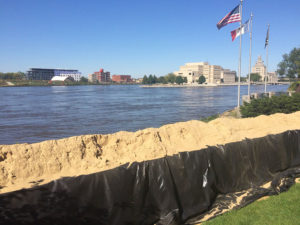 The Cedar River in Cedar Rapids dropped below the major flood stage of 16 feet this morning. It crested at its second highest level ever — just under 22 feet — on Tuesday.

Thousands of homes and businesses in Cedar Rapids were spared from damage due to the construction of a massive temporary wall that held back the water.

After the record flood of 2008, the city prepared a plan to fight a similar disaster in the future. City manager Jeff Pomeranz says that plan was put to the “ultimate test” this week.

“Over the last several days our community has gone through an amazing and harrowing experience that I believe will unite us as a community forever,” Pomeranz said at a news conference this morning. Residents who were in an evacuation zone are being allowed to move back into their homes today. Pomeranz said the fact that most of the city stayed dry is due in large part to volunteers who help build the flood wall.

“People all over the country have been looking at our city as an example of how a community can come together when face with a seemingly insurmountable challenge,” Pomeranz said. “Many times, as that wall was being constructed, it was impossible to tell whether that was a city employee or a member of the private sector — everybody pitching in and becoming one, with one goal.”