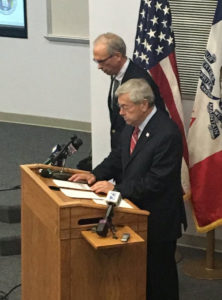 “It frees money, federal money that may be used in those declared counties to make repairs to roads, bridges, public buildings and other things that were damaged during the disaster,” Schouten says. The storms hit Allamakee, Chickasaw, Clayton, Fayette, Floyd, Howard, Mitchell, and Winneshiek counties and dropped torrential rains that led to flash flooding. State and local officials had to do a damage assessment to prove the need for a federal disaster declaration.

“Our best estimate as to the amount of damages were four-point-eight million dollars. We submitted that amount to FEMA Region seven,” Schouten explains. Some of those eight counties were also involved in a second round of flooding that began September 21st. Schouten says they expect to ask for another federal declaration for the second flood event, and hope to combine the paperwork for those counties which suffered a double blow.

“We’ll be asking if those two disasters can be joined,” Schouten says. “There is quite a bit of a temporal gap between the two disasters, so we are unsure whether FEMA would allow us to do that. But if in fact it would, it certainly would ease some of the administrative burden in handling two different disasters in these presidential disasters within the same county.” The governor today added Fayette and Muscatine counties to the state disaster declaration list for the September flooding — making a total of 23 counties have now included for that event. The other counties are Allamakee, Benton, Black Hawk, Bremer, Buchanan, Butler, Cedar, Cerro Gordo, Chickasaw, Delaware, Floyd, Franklin, Hancock, Howard, Jones, Linn, Louisa, Mitchell, Story, Worth and Wright.

Schouten says they don’t know yet how much damage there will be from that round of flooding.

Schouten says, “Our office is working with the local emergency management coordinators and others within those counties to begin the damage assessment process. Because the water is still receding, much of that work cannot yet be done.” For the eight counties that are now under the federal disaster declaration, the state prepares what’s called a project worksheet.

“It sets out the damages and what it will take to repair or replace whatever was damaged in the original disaster,” Schouten says. He says that worksheet is then used as they seek the federal funds allowed to make repairs. Schouten says it shouldn’t take very long before they have the process underway.

“Give us another week and we’ll have sent people out to have initial meetings with those applicants within the eight counties so we can begin the project worksheet — and more importantly — to begin the process of getting those damages repaired,” Schouten says.

The latest Presidential Disaster Declaration is the 23rd approved for the state of Iowa since March 2007.