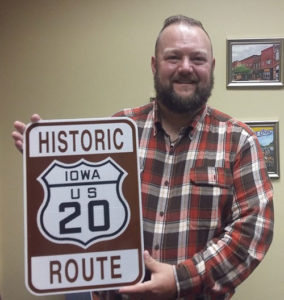 A movement is underway to bring tourists back to small towns in Iowa and nationwide by promoting a roadway that was around long before Interstate 80.

Bryan Farr is the president and founder of the Historic U.S. Route 20 Association and he’s working to unite communities all along the very lengthy stretch of road.

“What we’re trying to do is connect the longest highway in the country, which runs from Boston, Massachusetts to Newport, Oregon,” Farr says, “and make it a travel destination, to get people to take the original 1926 highway as it was laid out across the country.”

Coast to coast, the highway runs about 32-hundred miles, but in Iowa, the road covers 328 miles from Sioux City to Dubuque. Other towns along the way include: Waterloo, Iowa Falls, Webster City, Rockwell City and Sac City.

“We are encouraging people to get off the interstates, get off the four lanes and come back into small town America, to see the small towns, mom-and-pop businesses,” Farr says, “to see what we consider to be the best of America, really, in all of these small towns.” Farr is meeting with city leaders and chambers of commerce officials along the route, promoting historic road signs and banners with the Route 20 logo, much like what’s seen with the more-famous Route 66 in the southwestern U.S.

“We understand there is a purpose for interstates and four lanes to get from A to B in a hurry,” Farr says, “but we’re finding people like to take a little bit of a slower pace and see what our relatives and ancestors took at a slower pace to get across the country.” A national travel guide specifically for Highway 20 is due out in the spring of 2017. Learn more about the Massachusetts-based organization at: www.historicUS20.org