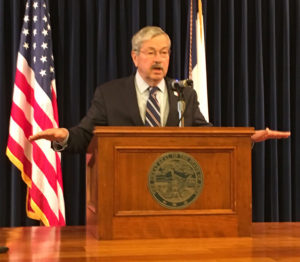 Governor Terry Branstad, a key supporter of Donald Trump, is defending the real estate developer’s use of legal tax breaks to account for nearly a billion dollars worth of business losses two decades ago.

“I had opponents that got rich off of this system,” Branstad told reporters this morning during his weekly news conference. “Donald Trump has been so audacious to admit that, but he says the system is flawed and ought to be changed.”

Trump has proposed federal tax code changes, but he has not called for changing the deduction that’s getting attention after a New York Times report on Trump’s taxes.

Branstad criticized real estate developer Jack Hatch, his 2014 opponent, for releasing just one year of tax returns to the public.

Branstad’s 1982 opponent, Roxanne Conlin, is married to a Des Moines real estate developer and some Branstad supporters that year wore buttons that read: “I paid more taxes than Roxanne.” The Conlins revealed they were worth $2.2 million, but paid no state taxes and only $3,000 in federal taxes for the 1981 tax year because of tax shelters. 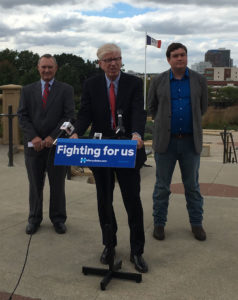 “If it wasn’t right for Roxanne Conlin who was running for governor of this state, it’s certainly not right for someone who wants to be president of the United States,” Miller said this afternoon during a news conference organized by Hillary Clinton’s campaign.

Vermont Senator Bernie Sanders had been scheduled to campaign in Iowa today on Clinton’s behalf, but Sanders will be here Wednesday instead. He’ll headline a rally at Drake University.