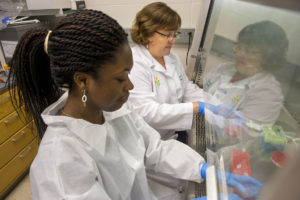 Researchers at Grinnell College say they’ve found that using a copper mix for all types of metal materials in hospital rooms can cut down on dangerous bacteria.

Shannon Hinsa-Leasure led the research team which studied materials made with a copper alloy at the Grinnell Regional Medical Center. “What we found was that on average, copper surfaces had 98 percent fewer bacteria than control surfaces,” Hinsa-Leasure says.

She says the use of copper to fight bacteria has been studied before, but they took it a step further.

“What separates our study from some previous work that had been done in ICU’s — we were looking in medical surgical suite rooms — these are rooms where patients are up and moving around,” Hinsa-Leasure explains. “We look at surfaces around the patients, but we also looked in the bathrooms. We had copper alloy sinks and grab bars and toilet flushes in the bathroom that we were testing in this study.”

Hinsa-Leasure is an associate professor of biology at the college, and says they were also able to get a good comparison of rooms that were in use and those that weren’t. She says the unoccupied and occupied rooms that served as controls had relatively the same levels of bacteria, while the rooms with copper has significantly lower levels of bacteria, with the unoccupied room having much less bacteria than the occupied rooms.

“So what this means is that even when you terminally clean a room, the number of bacteria build up in that room. Even though the room may look clean and ready for a patient, there’s a lot of bacteria there. So the copper really help maintain these terminal cleaning levels in vacant or empty rooms.”

Copper alloy material does cost more than other metal products, but she says there’s a savings in the long run. “If you look at the minimal increase in cost to put in a copper alloy, it pales in comparison to what you are saving. Not only lives, but also money to keep the hospital running,” according to Hinsa-Leasure.

Hinsa-Leasure says copper has the right properties to prevent the bacteria from thriving. “There have been some studies that have been done that show the mechanism of action — so it’s the copper ions themselves that get into the cells. And they are able to damage the DNA, cause some oxygen radicals and really do a lot of damage to the cells,” she explains.

Hinsa-Leasure says hospitals should consider using the copper alloy material to cut infections. But she says they don’t have to make every room in the hospital look like a penny. “We don’t need copper everywhere — but it should be strategically placed in environments where people are immune compromised,” according to Hinsa-Leasure. “So especially if hospitals are looking at doing renovations or restructuring, that’s the time to put it in. Also, you might want to put it into some areas you already have in your hospital, your ICU’s and different areas of the hospital where it could be important.”

Hinsa-Leasure led the research team that included undergraduate students Queenster Nartey and Justin Vaverka. They published their results in the American Journal of Infection Control.