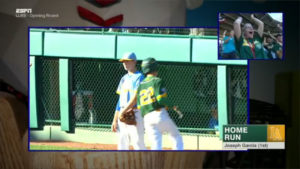 The mother of a Johnston baseball player whose battle with cancer was featured during the Little League World Series has died.

Jen Garcia was being interviewed on ESPN about her fight with pancreatic cancer and the bracelets the Johnston Little League team wore to support her as son J.T. batted against California in the Little League World Series.

The interview was interrupted when J.T. hit a home run and Garcia stood and cheered.The video of the interview drew national attention.

Garcia died this morning. She was an elementary teacher in Urbandale and the superintendent of schools there sent out an email informing parents of her death.

The email called Garcia a “highly valued member” of the school team and someone who “will be deeply missed by all of those who had the pleasure of knowing her.”