You are here: Home / Sports / Struggling Hawkeyes prepare for Minnesota 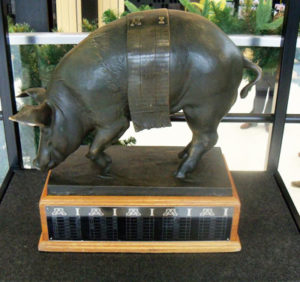 Iowa coach Kirk Ferentz says the fun in football is playing well. The Hawkeyes have not had much fun the past few weeks. A season that began with a national ranking and lofty expectations appears close to unraveling as Iowa prepares to visit Minnesota in the annual battle for Floyd of Rosedale.

Iowa is 3-2 after a loss to Northwestern and with the toughest part of the schedule beginning this week there needs to be significant progress.

“I don’t think any of us are playing perfect or coaching perfect so we are all frustrated right now”, said Ferentz. “We came up short twice and that leads to frustration. There is not a person in our organization who can’t do a better job and that is what we are all trying to do.”

Iowa’s run defense has been dreadful and the Hawkeyes must now play a Gopher team that has averaged 435 yards in total offense the last two games in the series. Minnesota senior quarterback Mitch Leidner threw for 259 yards a year ago in Iowa’s 40-35 win in Kinnick Stadium and says there is no love lost between the Gophers and Hawkeyes.

“There is a lot of hatred between the two states and two teams and I think everyone on this team understands that”, said Leidner. “I am pretty excited for this one and to bring the pig home your senior year is everything you want.”