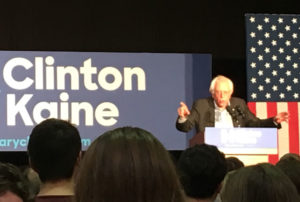 Vermont Senator Bernie Sanders addressed a crowd of about 300 at Drake University late this morning, urging his former supporters to vote for his former foe.

“Vote for Hillary Clinton on Election Day and the day after that we are going to roll up our sleeves and make sure that we bring forth the most progressive agenda in the United States of America,” Sanders said, to cheers.

Sanders told the crowd he and Clinton agree on a host of issues, like the need to address climate change and raise the minimum wage.

“Politics is not about personality and I know if you watch the TV and you watch national media, they think that politics is like ‘Dancing with the Stars,'” Sanders said and the crowd laughed. “You know, it’s like the Super Bowl or the World Series. It’s not. It’s not entertainment. What politics is about in a democratic society…is which candidate will have a positive impact on your lives.”

“I would have hoped that in the year 2016 a candidate of a major political party does not make the cornerstone of his campaign bigotry,” Sanders said, to some of the loudest and longest bursts of applause during his speech.

Sanders urged people in the crowd who had supported his candidacy to vote for a president who “brings us together, not divides us up.”

Giada Morresi, a Drake student from Illinois, was in the crowd, wearing a t-shirt that had the name “Bernie” on it. She said Sanders “made a good case,” but she won’t vote for Clinton.

“Just her past record and the things she’s done, I don’t think that outweighs any promises that she could make,” Morresi said. “And I think that the fact that she’s changed so many of her opinions isn’t convincing enough.”

Gina Folsom of Cambridge supported Sanders in the Iowa Caucuses and wore a Sanders campaign t-shirt to the rally, too. She will vote for Clinton, though, and Folsom suggested Sanders backers who refuse to vote for Clinton will “reap what they sow.”

“I think they’re thinking more of themselves and how they want to remain pure if they vote for a third party (candidate), not that people never should, but I mean right now we have so much at stake we can’t do that,” Folsom said.

A spokeswoman for the Republican National Committee issued a written statement, saying Clinton has a “millennial problem” and is “desperate to convince young people to trust her” so that’s why she’s dispatched people like Sanders to visit college campuses in Iowa.