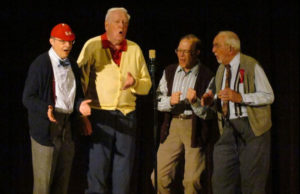 A Barbershop Quartet known as Toad 2.

More than one-thousand barber shop quartet singers, family, friends and fans from across the Midwest are heading for Cedar Rapids for a three-day contest and convention of the Barbershop Harmony Society.

Bob Kerdus is a singer and spokesman for the Harmony Hawks of Cedar Rapids who are hosting the event. It will feature 31 quartets and a dozen large-scale choruses.

“Those 31 quartets will each sing two songs, they’re judged and evaluated,” Kerdus says. “The top ten are announced that night at the end and those top ten will go into the quartet finals, which will be Saturday evening.”

The choruses may be upwards of 60 members each, but still singing in four-part harmony. That chorus competition starts Saturday morning. For the first time this year, one of the quartets is “mixed,” meaning, there’s at least one female member. While the majority of participants are male, Kerdus says one place they vary widely is in age.

“We have a couple of high school kids, a couple of college-age guys that sing with us and then all the way up to some 80-year-old gentlemen that sing with us,” Kerdus says. “We are very much a cross-generational organization, obviously, more weighted to the Baby Boom generation than those young people.”

Efforts are underway to inspire more young people to get involved in acapella singing, and TV shows and movies like “Glee” and “Pitch Perfect” are helping. Kerdus, who’s 67, says the Barbershop Harmony Society is striving to make the music appeal to all audiences in order to keep the art form thriving.

“Our society is trying to modernize that music, get a lot of the ‘newer’ music arranged in the barber shop style,” Kerdus says, “getting songs that are from the 80s, 90s and 2000s instead of a lot of what we call contemporary songs are the 60s and 70s songs.”

Singers are coming from five states: Iowa, Nebraska, South Dakota, Kansas and Missouri. The competition runs Friday through Sunday at the historic Paramount Theatre. There are nearly 800 chapters of the Barbershop Harmony Society and about 23,000 members in the United States and throughout the world.