You are here: Home / News / Chelsea Clinton: My mother represents ‘the heart’ of country’s values 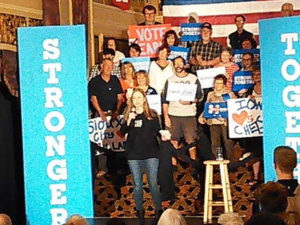 Hillary Clinton’s daughter told a crowd in Sioux City late yesterday afternoon that the country’s values “are at stake” in this year’s election.

“I never thought I would see in my lifetime the almost normalization of hate speech that we are witnessing from the Republican nominee and his campaign,” she said.

That was part of Chelsea Clinton’s answer to a woman in the crowd who said — while asking a question — that Hillary Clinton has been subjected to a “smear campaign” since the 1990s. Chelsea Clinton, who is 36, told the crowd she doesn’t remember a time in her life when her mother wasn’t being attacked. And she asked Iowans to examine her mother’s record.

“Mom’s been fighting for maternity and paternity leave for, literally, longer than I’ve been alive,” Chelsea Clinton said, getting laughter from the crowd, “and for early childhood education and for investments in our public education system and so much more that I know go really to the heart of our values as a country.”

More than 100 people attended the event in Sioux City. Chelsea Clinton also made a campaign stop in Dubuque yesterday.

A spokeswoman for the Republican National Committee issued a written statement in response to the trip, saying Hillary Clinton’s “dishonesty and lies have demonstrated she is the wrong person to lead our country.”