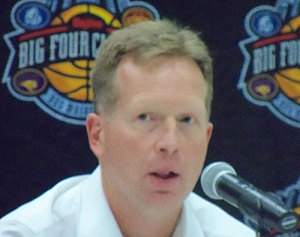 Drake fans are a patient bunch when it comes to the men’s basketball program. But even a fanbase that has enjoyed only four winning seasons since 1987 is going to expect progress this season. Ray Giacoletti enters his fourth year at the helm and the Bulldogs return eight players that saw significant minutes a year ago during a 7-24 campaign that included only two Missouri Valley Conference wins.

“How this team gets better is at the defensive end”, said Giacoletti. “That’s where we have the most room to get better.”

Drake will regain the services of one of its best defenders. Junior guard C.J. Rivers started the first 11 games before suffering a season-ending hand injury and 6-11 post Kory Kuenstling returns after redshirting last season. The Dunkerton native appeared in 30 games as a freshman and Giacoletti says he may be the biggest surprise in practice.

Giacoletti says the door is open for the Bulldogs to climb the ladder in the Valley.