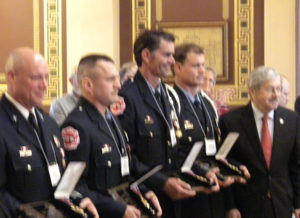 Ten firefighters and law officers were recognized at the Iowa State Capitol Wednesday for going above and beyond the call of duty.

Governor Terry Branstad and Department of Public Safety Commissioner Roxann Ryan presented 7  of them the Sullivan Brothers Award of Valor and three other the Historic Valor Award.

Police officers told Brown that a mother and three children were in the home and he entered the home through a burning door with Farmer without a hose and in zero visibility conditions. Firefighters T.J. Taylor and Troy Purdy assisted in the rescue on February 7th of this year.

“It took these four men less than a minute and half from arriving on scene to safely removing the three victims from that burning home. The three family members have since made a full recovery,” according to Ryan.  Captain Brown talked with Radio Iowa after the ceremony and says this rescue was a little different as they had to split up inside the burning home. 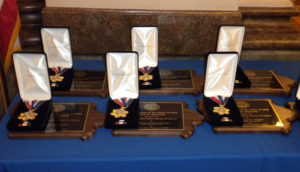 Brown says in this situation they made the decision to go in without a hose line and split up because time was critical. “We knew from the police officers outside they had heard the children’s voices towards the back of the trailer. We no more than got into the living room when I heard the mother call out from the front of the trailer, so at that point, we separated,” Brown says. The captain was hesitant to be called a hero.

“It’s a nice honor, not necessary, but very well appreciated,” Brown says. He says they were just doing their job and credited their training for allowing them to make the rescue. 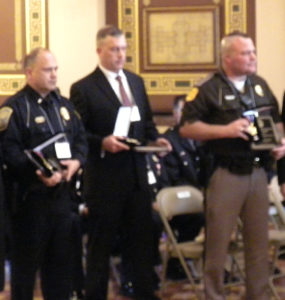 Lieutenant Dennis Mernka and officer Nathan Eldredge of the Fort Dodge Police Department were honored along with Iowa State Patrol Trooper Matt Eimers for helping save a man who was trying to jump off a Union Pacific Railroad Bridge over the Des Moines River basin in Fort Dodge.

She says the three worked to get the man off the bridge and she says they showed immense patience in very difficult conditions. The rescued happened Saturday, December 12th — a day that was very cold. Ryan says the man agreed to come off the bridge, and then ran and tried to jump over the side. Office Eldredge grabbed him.

Ryan says the man was five-foot-eight and weighed 250 pounds and Eldredge hung on. The other officers grabbed on and kept them from going over the edge. The man eventually slipped away and fell, but survived the fall.   Eldredge talked about winning the award.

“Unbelievable. I’ve been on the force 29 years, nobody from our department has ever won it before. So, I am very proud, a very proud moment for Fort Dodge P.D.,” Eldredge says. The Sullivan Brother’s Award of Valor is named after the five Sullivan brothers of Waterloo who died in World War Two while serving aboard the same ship. It was started in 1977. The Historic Valor Award is newer and honors those who have previously not been recognized for their efforts. Former Keosauqua Fire Chief Noel Harlan was given the award for helping a neighbor Max Wellborn who caught himself on fire while welding.

“Resisting arrest, the assailant fired five rounds from his .357 magnum at David Elledge — striking him once in the abdomen and once in the foot. Deputy Elledge’s life was spared in no small measure by the decisive actions taken by Duncan Gross to disarm the suspect and render life-saving assistance to his fallen comrade,” Ryan says.