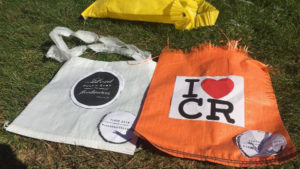 The flood waters are gone in Cedar Rapids, but thousands of sandbags remain. A group of college students has a plan to turn the bags from sandy to handy.

Derek Siddell, a junior at Mount Mercy University, told KCRG-TV the project was launched as he and other volunteers were filling sandbags prior to the Cedar River’s second highest crest on record.

“We knew there was the potential that a lot of these (sandbags) weren’t going to be touched (by floodwaters),” Siddell said. “So we kind of thought, what are we going to do with these bags? Is there something we can do before they just get tossed in the landfill?” The plan involves saving some of the bags and after some alterations, selling them to people interested in a piece of history from the flood.

“Turn these sandbags into reusable handbags,” Siddell said. The students are part of the Mount Mercy chapter of Enactus, a nonprofit that teaches young adults about entrepreneurship. The students are using the sandbag-handbag transition as part of an annual project. Nate Klein is an assistant professor in Mount Mercy’s department of business. 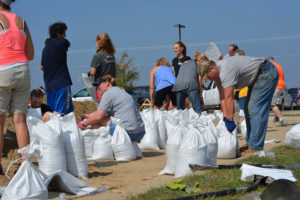 “I think it’s pretty exciting to see students get passionate about a cause – to say, ‘what is something sustainable that we can do instead of flooding our landfills? Instead, we can have a commemorative item and people can remember what we did,'” Klein told KCRG.

The student group has partnered with nonprofits which will take care of the stitching and the logo printing. Siddell is hoping the sandbag-handbags will be ready before Christmas.

“People can have kind of a piece of memory with them…it’s not just the bag they’re reusing, it’s a bag that was used to prevent a flood,” Siddell said. More than 250,000 sandbags were made in preparation for the flood last month in Cedar Rapids. They worked, along with other temporary flood barriers, in holding back the waters and preventing major damage. The Mount Mercy students plan to convert about one percent, or 2,500, of the sandbags into handbags.