You are here: Home / Business / Reynolds wraps up Argentina swing of trade mission 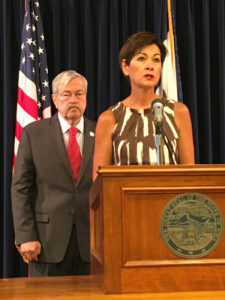 Lieutenant Governor Kim Reynolds is in Uruguay today after a three-day tour of Argentina. Argentina’s new president is hoping to reopen his country to foreign investors and trade after the country’s previous president operating a mostly closed economy.

“We are actually one of the first states in and certainly the first lieutenant governor or governor that’s been in,” Reynolds told Iowa reporters during a telephone conference call on Thursday. “I’m sure there’ll be multiple states behind us.”

Argentina’s president slashed taxes, adjusted the country’s currency and laid off thousands of government workers soon after he took office in December. Teachers, hospital workers and government employees have been striking for better pay. Strikes were underway as Reynolds was speaking to Argentina’s Board of Trade on Wednesday.

“I was in the middle of kind of giving the overview of Iowa and there was some strike or demonstrated outside the window and I continued to get louder. They weren’t even phased by what was going on,” Reynolds said. “It is part of what goes on every day.”

Government officials and businesses in Argentina have been particularly interested in Iowa’s wind industry and renewable fuels market as well as our community college system, according to Reynolds. She told Iowa reporters several follow-up meetings with businesses operating in Argentina have been scheduled with contacts she’s made during her trip.

“I think there’s a lot of opportunities for Iowa companies and they are eager to make the connections,” Reynolds said, “so I think this is actually a good time to get into the market.”

Reynolds expects to host a trade delegation from Argentina in Iowa soon. Reynolds and the Iowans along for her South American trade mission were at the U.S. Embassy in Uruguay last night. Reynolds will speak to that country’s chamber of commerce today.