You are here: Home / Human Interest / Graves of pioneer babies to be marked with headstones 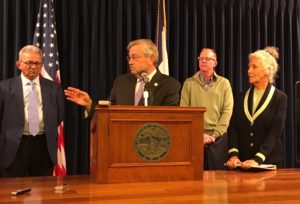 More than 300 pioneer-era babies who lie in unmarked graves in Des Moines will soon be identified.

The governor’s “Iowa History Fund” and private donations will complete a project to place gravesite markers, engraved with the names of the babies, in a grassy portion of an historic Des Moines cemetery. Kristine Bartley is with the Abigail Adams Chapter of the Daughters of the American Revolution, the group that’s been trying to raise the money.

“All of the unmarked baby graves who’ve been unmarked for over 100 years will finally have proper headstones,” Bartley says.

The Woodland Cemetery is located along a busy six-lane thoroughfare in Des Moines. The first burial at the cemetery was in 1850. Soon after that more than 500 babies were buried there with small wooden crosses to mark their graves. The crosses decayed and are long gone, but officials say meticulous records were kept. A previous fundraising campaign financed and installed markers for nearly 200 graves. About $27,000 will complete the project.

“We will begin this winter doing the rest of the planning…documenting all of the names, which we already have records for,” says Ganesh Ganpat, cemetery manager for the City of Des Moines. “…We hope to install (the headstones) by April or May of the coming year.”

The proceeds from sales of Governor Terry Branstad’s biography are going into the “Iowa History Fund.” A $10,000 grant from the fund will be used for this project, along with $10,000 from the Prairie Meadows Foundation and donations from two prominent Iowa businessmen.

Iowa’s first millionaire is buried in the Woodland Cemetery. The state’s first governor is buried there, too, in a mausoleum that’s been recently restored.