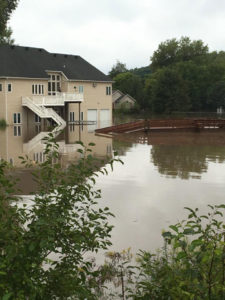 Alliant Energy is offering customers an increased rebate if they need to replaces appliances that were hit by flooding.

Alliant spokesman Justin Foss says, “We have activated enhanced rebates for our customers who are flood-affected across all the declared disaster counties in the state.” The company already offers rebates for those replacing their appliances with more energy-efficient models and Foss says this adds a little more for flood victims.

He says it increases the rebate assistance by 50 percent for a new water heater, air conditioner or other flood impacted appliances. Alliant’s rebate information on-line shows a wide variety of rebates form 150 to 800 dollars depending on the type of system and upgrade. Foss asks anyone in a flood area to take a good look at any appliances that may’ve been flooded.

“Customers might thing that they don’t need to replace their hot water heater or their furnace — if they are both on gas — if they were affected by water because it will look like it dried out and it’s all okay. But in reality, that floodwater will corrode and rust some of the gas safety valves and other equipment over time, which can make that appliance unsafe,” Foss says. He says you simply need to verify the flood damage to qualify for the enhance rebate.

Foss says you need to have your installer certify that you were flood-affected or send a letter stating that you were flood-affected. The governor has declared 25 counties state disaster areas. For more information about rebates and required documentation, go to: alliantenergy.com/floodrebates. Customers can also call 1-866-ALLIANT (866-255-4268).