You are here: Home / News / ‘I know it in my heart,’ Pence says, predicting victory 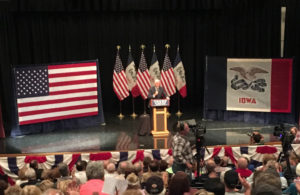 GOP vice presidential nominee Mike Pence spoke to about 200 people in Newton this afternoon, repeatedly getting standing ovations as he praised his running mate Donald Trump.

“I know what the American people are going to choose,” Pence said. “I really do. I know it in my heart, but let’s all not take anything for granted.”

Toward the end of the event, during a brief question and answer session with the crowd, a man praised Pence, “for not jumping, bailing out on Donald Trump,” the man said and the crowd applauded. “That shows a person’s character.”

Iowa Congressman Steve King delivered the same message to the crowd as the warm-up speaker for Pence.

“I’m going to ask you: stand together, stand strong, bring Iowans to the polls, let’s get this done, let’s get it done right,” King said. “We’ve only got ’til November 8th. We can sprint that long, can’t we?”

King is “all in” for Trump and he declared Trump the winner of Sunday’s “prize fight” debate with Hillary Clinton. King criticized House Speaker Paul Ryan — the Wisconsin Republican — for saying on Monday that he will no longer defend Trump.

“That call didn’t need to be made…because I hadn’t seen him advocating for Donald Trump up to this point either,” King said. “So I think it hurts a lot and it changed the narrative and the bounce and the spring that would have come from a rousing victory from teh debate Sunday night was diminished.”

Pence did not mention his former House colleague during appearance in Newton. A woman named Rhonda told Pence she’s worried about voter fraud.

“If Hillary Clinton gets in, I myself, I’m ready for a revolution because we can’t have her in,” she said.

The woman named Rhonda continued: “I’m like Trump. Am I not saying the truth here?”

A few in the crowd clapped.

Pence continued: “There’s a revolution coming on November the 8th, I promise you.”

Pence left Newton and headed to Davenport where he was to speak at the Scott County Republican Party’s annual fundraiser. Arkansas Senator Tom Cotton is also headlining the event, which often has served as a proving ground for presidential candidates of the future.

Missouri Senator Claire McCaskill campaigned into Iowa today on behalf of Hillary Clinton. McCaskill said she doesn’t think Americans “are going to elect someone who brags about groping women” as their president.