You are here: Home / Education / Thousands of dollars for college up for grabs in Iowa scavenger hunt 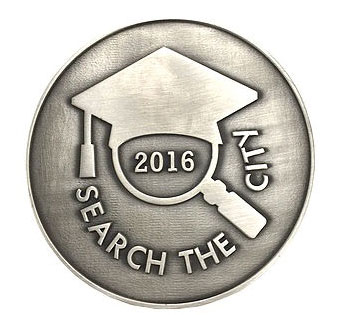 The medallion at the center of the search.

It’s not a new version of “Pokemon Go!” that has people scurrying around Iowa’s largest city this week, but instead it’s a contest to seek out a hidden silver coin worth thousands of dollars.

“Search The City” has many hundreds of participants on the hunt in Des Moines. Tim Nelson, marketing director for the I Have a Dream Foundation, explains how it works.

“It’s a scavenger hunt where we hide a medallion somewhere in the greater Des Moines area and we release clues as to the medallion’s location every morning,” Nelsen says. “The first person that has followed all the clues and found the medallion, as long as they registered for the contest ahead of time, they can win a $10,000 college savings account.” The contest aims to promote the importance of saving for college and is open to anyone, but he says one group comprises a majority of the searchers.

Nelsen says, “Most of our contest participants seem to be parents trying to find this to help ease the cost of college for their children.” It costs $5 to register for the contest, money that is pumped back into the foundation which works with local disadvantaged students to get them college-ready. The $10,000 in the college savings account came from a year-long fundraising effort and sponsorships. The medallion search started Monday.

“It’s always really exciting because it’s out there, somewhere,” Nelsen says. “I just keep watching my phone for somebody to call and say they’ve got it in their hands.” Two clues have already been revealed on the foundation’s website and via Twitter, but they’re still relatively vague about where the medallion is stashed.

“It’s about the size of a hockey puck and maybe a quarter-inch thick, it’s just a large coin,” Nelsen says. “I believe there’s some tin in it. I know the person that won last year did use a metal detector but she can’t remember if it went off or if it actually brushed the leaves and pine needles and things that were covering the medallion away.” He says the foundation takes a proactive approach to dropout prevention to put at-risk students on the path to college and career success.

The program incorporates academic assistance, social support, mentoring and parent programming into a comprehensive model. On average, an at-risk child has about a 60% chance of graduating from high school, but Dreamer students are over 95%.