You are here: Home / News / Bill Clinton tells Iowa crowd: ‘walk away from the madness’ 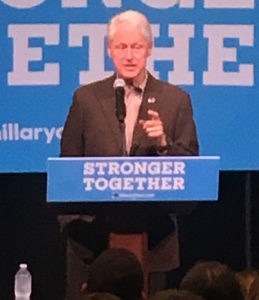 Former President Bill Clinton has embarked on a get-out-the-vote bus tour for his wife’s campaign, urging Iowans to reject the “venom” of this year’s political debate and focus on policies rather than personalities. Clinton’s first stop was on the Simpson College campus in Indianola.

“Your mind and your heart have much more effect on the future than what you think. You have the power to create,” Clinton said. “The whole idea of America is that we can make new tomorrows and you just have to decide whether you believe that.”

The former president spoke for more than half an hour, outlining his wife’s policy prescriptions for the energy sector, especially West Virginia’s coal industry. And Clinton told the crowd “diversity is a strength, not a weakness.”

“Don’t feed all this venom and poison and acid that’s been put in our political society,” Clinton said. “Reach a hand of friendship out to people. This is our country. Our whole future’s riding on it.”

Clinton never said the name of his wife’s Republican opponent, He closed by asking Iowans to “walk away from the madness.”

“I am telling you we are the verge of having the best times America has ever had if we do the right things and show the right face to the world,” Clinton said.

“Iowa can’t be the only state that doesn’t see the wisdom of electing Hillary Clinton,” Vilsack said. “…Iowans don’t let their friends and neighbors vote Trump.”

Vilsack blasted Iowa Senators Chuck Grassley and Joni Ernst for failing to join fellow Republican Senators in Nebraska and South Dakota who have distanced themselves from Trump. Bill Clinton will headline a rally at the Waterloo Cattle Congress tonight. Tomorrow, he’s scheduled to attend rallies in Mount Vernon and Davenport.