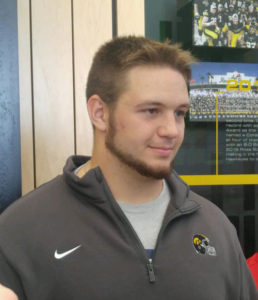 Iowa junior Ike Boettger says when he was approached about moving from right tackle to left guard his response was “let’s do it”. The Cedar Falls native was part of an a reshuffled offensive line that helped the Hawkeyes rush for 179 yards in a 14-7 victory at Minnesota.

Boettger says with the exception of center, the linemen are all interchangeable.

“Obviously center is a little different with snapping the ball but we still have a few guys that can do that”, said Boettger. “You have seen Sean Welsh move out to tackle. You have seen Boone Myers play guard and tackle and now I have done that. It is the way we are taught.”

Boettger had not played guard since practice during his redshirt freshman season and was asked this week if he will be there permanently.

“Everything we ask any of our players to do is founded on one thing and that is what can we do to help our team”, said Ferentz. “I think our guys understand that.”